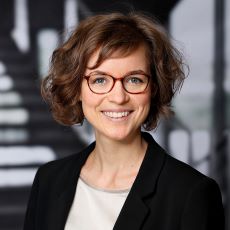 Office hours:
during the winter semester 2021/22 on Thursdays from 1 pm to 2 pm in room 168.
Please make an appointment via https://terminplaner4.dfn.de/wbQOd6JNOLaCYaOP.

Julia Baumann joined the Geschwister-Scholl-Institute for Political Science in March 2019 as a research fellow at the Department of Comparative Political Systems (focus on East Central Europe and Eurasia). Her research focus lies in the field of comparative authoritarianism. She is particularly interested in legitimation strategies of authoritarian regimes as well as external influences on authoritarian persistence.

Julia studied European Studies in Magdeburg and St. Petersburg between 2011 and 2015, where she dealt with the European integration process and the political transformation in Central and Eastern Europe. In 2017, she graduated with a specialization in Politics and Security from the School of Slavonic and Eastern European Studies (UCL London) and the Higher School of Economics Moscow (HSE). There, she was concerned with Eastern Europe and Eurasia, in particular from a political science perspective. In her master's thesis, Julia investigated the influence of authoritarian cooperation on the legitimation strategies of authoritarian regimes, using the example of Russia-Belarus.