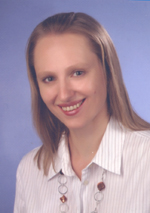 Johanna Schmidt-Jevtic earned her master degree in 2001 at Ludwig-Maximilians-Universität Munich (Major: Political Science, Minors: History and Slavic Studies). From 2001 to 2004 she worked as a research associate at the chair of political systems and European Integration, headed by Prof. Dr. Dr. h.c. Werner Weidenfeld, as project staff member at the research group Germany of the Center for Applied Policy Research as well as lecturer at the Geschwister-Scholl-Department for Political Science. After a temporary stay abroad in Belgrade/Serbia she returned in 2009 as research associate to the chair of political systems and European integration at the Geschwister-Scholl-Department, now headed by Prof. Dr. Klaus H. Goetz.

Currently she supervises the LMU-participants at the international “Allianz Summer Academy”. The application deadline for this year's event in 06 February 2017.