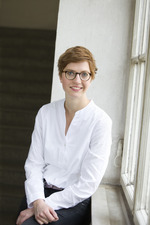 Dr. Astrid Séville is on leave from March to July 2022.
During this time she holds the Sir Peter Ustinov Chair of the City of Vienna at the Institute of Contemporary History at the University of Vienna.

Astrid Séville is an Assistant Professor (“Akademische Rätin a.Z.”) at the Chair of Political Theory at the Geschwister-Scholl-Institute of Political Science at the LMU. She studied Political Science, French Philology and Historical Anthropology at the Albert-Ludwigs-Universität Freiburg and at the Université Denis Diderot Paris. In 2015 she gained her PhD with a thesis on the political rhetoric of “There is no alternative”; her dissertation was awarded the German Study Prize in 2016.

Her current project is dedicated to current “varieties of populism” as a challenge to liberal democracy. Her research develops a phenomenology of anti-populism. Populism leads to a debate about liberal democratic principles and fundamental concepts of democratic theory. The project therefore discusses the relationship between democracy and populism, compares relevant debates in Europe and examines how societies publicly describe and articulate themselves as liberal democratic.