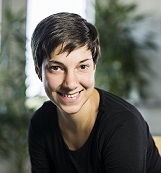 Nina Guérin was a Research Fellow at the International Relations Department of the Geschwister-Scholl-Institute of Political Science between April 2014 and August 2019.

Her research interests included the comparative analysis of minorities- and migration policy within Europe and beyond. In her Master thesis she investigated the contribution of Will Kymlicka´s political theory about multiculturalism on quantitative conflict research. In her Dissertation project she dealt with the change of migration policies in the EU neighborhood states.

She studied at the University of Stuttgart and the Institut d’Etudes Politiques de Bordeaux and earned a French-German B.A. in Social Sciences (2007-2010) and subsequently a French-German M.A. in Empirical Social and Political Research (2010-2013). She then worked as a Research Associate at the Political Theory and Empirical Democracy Research Department of the Institute of Social Science at the University of Stuttgart until 2014.

For more information on Nina Guérin, please visit her webpage on Research Gate